Every time someone finds out I'm a photographer, I get a variation of the same two questions: "What kind of photography do you do?" or "What do you like to take pictures of?" I usually answer the first with an answer of art photography--I hope that doesn't sound as pretentious as I think it does--mainly as a way to distinguish what I do from portrait or nature photography. Both of those obviously are very often "art" as well, but they have a specific function alongside their identity as art that my work generally doesn't fit into.

The second question is tougher for me to answer. I feel more like I have a certain style than a particular subject matter I'm drawn to. Even describing what that "style" is can be difficult though as I try to think of what ties together some very disparate scenes and objects that I feel drawn to. I have often used the term Americana to describe what I like to shoot, but that is such a vague term as to be almost useless. I love to shoot scenes of decay. Sometimes these are technological decay as in abandoned factories or junkyards, and sometimes they are human decay as in cemetaries and the statues and markings we put up in those places to find meaning in death and loss. However, this is only one facet of a wide range of subjects I find myself wanting to capture and explore with the camera. Like I said, a question I struggle to answer succinctly.

I bring up this topic because I've been struggling to write an artistic statement that will be placed on the wall next to my photos at the next Tamarack show, starting in May. In a couple of paragraphs I needed to summarize my work and my approach to photography generally. I wanted to post what I came up with to see how it sounded to others. I've gone through about 5 drafts of it and don't think I can change it anymore without getting some outside input. These types of documents of self-promotion are the toughest things to write, and this has been no different.

To steal a phrase from William Eggleston, as a photographer Riley Vann is at war with the obvious. His art engages the mundane objects of everyday life, the things that have become invisible to us, and rescues them from the background into which they vanish. This may involve more abstract studies in texture and light or a cultural anthropological “dig,” focusing on objects that act as signposts and touchstones for a range of social values and concerns. While his subject matter may vary, all of his images strive to find the beautiful in the strange and the strange in the beautiful.

If nothing else, you now have a little window into what I try to do as a photographer, or at least my struggle to define what my vision is for my art. As you see more and more pictures on the blog, you can judge for yourself how accurate this statement is. Take care. 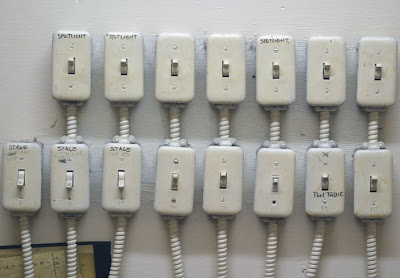 This is my first post on my first photo blog. I'm hoping it will provide motivation for me to work on new images and think out loud through new projects as well as a chance to get some feedback from others who are interested in photography. I have given up teaching English after 15 years in order to focus on my photography and graphic design work, and it sometimes feels isolating after facing roomfuls of people every day, so please feel free to let me know what you think of what you see here.

I'm going to start off with a couple of pictures that are currently on display at the gallery in Tamarack, a showcase for West Virginia arts, near Beckley, WV. 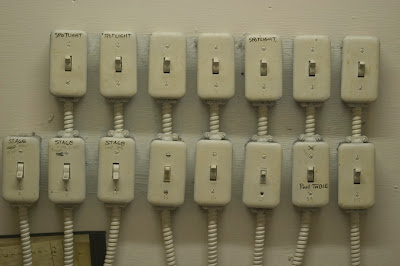 This photo was taken in the basement of the University of Charleston. I loved the repetition of shapes and of the textures in this image. I either need to go reshoot these switches or go back and re-edit the image though because I'm not very happy with my cropping of the picture. The switches are too hemmed in on the left side and it feels claustrophobic and a little unbalanced the longer I look at it. Thoughts? 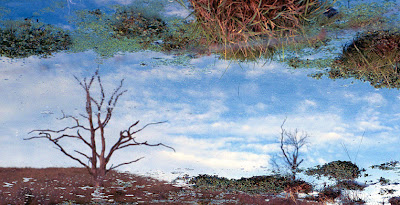 This image is the other photograph I have at Tamarack currently and is my wife's favorite. I don't usually take a lot of landscape photography mainly because to take really good landscape shots that don't look like any postcard you could buy, you have to have great imagination, patience, and skill. A willingness to get dirty doesn't hurt either. Most of my landscape shots are lucky if they even reach the level of postcard photography. This one however, was twisted enough to really capture my eye. It's a reflection of a hillside in late afternoon in a mud puddle. I have turned the image 180º in order to make it appear as the landscape itself and not a reflection. It is very disorienting and unsettling until you figure out what the image actually is doing. I'm very happy with the composition and idea behind this photo. Straight landscape I'm not so good at; *surreal* landscape is more my cup of tea.

Thanks for checking out my very first photoblog. I will update as regularly as I can. I am going to Boston this weekend and hope to take some good photos there. If anyone has any must-shoot subjects up there, please let me know. Take care.