My friend Matt went to see the photography exhibit at Tamarack that has some of my photos--thanks for the support!--but he had an interesting comment to make. He thought my titles weren't all they could be. One in particular one he commented on was this one, entitled currently "Traffic Mirror": 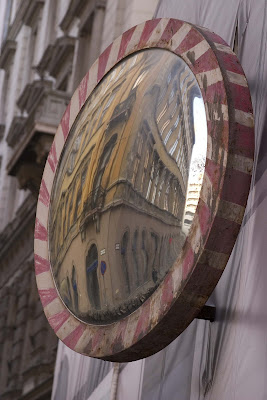 He pointed this out as only one example of how I wasn't doing all I could with my titles. He said, "I can see it's a traffic mirror. Your title should tell me something about the image that *isn't* obvious to me." He suggested something even as simple as "Budapest, 2pm" would provide some extra-photographic information about the subject, provide an additional insight into the image.

First, to provide some background, Matt is a poet. A fantastic, funny, brilliant poet. But don't take my word for it. Find out for yourself here or here. Obviously, Matt's creative work is much more verbal than mine is. Language is his focus, so of course he hones in on the only verbal part of the photograph: the title.

The question this comment initially brings to mind is what purpose does the title serve? Obviously, with any written endeavor, the title acts as a shorthand way to get a glimpse at the purpose of the overall piece of writing. Whether it's a 14 line sonnet or a 500 page novel, the title acts as a signpost to readers of what to pay attention to in the body of the work itself, even if it's only a repeated phrase from the main body of writing. The reader now knows to pay more attention to that line; they can be sure to read the whole piece with that phrase or image in mind. The title is very important tool to the writer for this reason, giving the reader a potential key to open up the piece of writing.

Obviously such a tool can be very helpful to photographers as well. It can, as Matt suggested to me, provide an extra-photographic signpost to help the viewer focus on a particular detail that s/he might not notice originally or provide some context which isn't available in the image at all. However, there is a very significant difference between photography and writing. The photographic image, by and large, is taken as a whole, absorbed all at once as a gestalt. Writing, whether it be poetry or prose, is alphabetic and must be read in a more or less linear fashion. You start reading with the first word and have to read them all in order to make sense of the piece. Obviously, I'm generalizing here and there are experimental writings out there that don't follow this strictly alphabetic ordering (I'm thinking of works like The Dictionary of the Khazars or even something as old as Ambrose Bierce's Devil's Dictionary, but by and large writing is something that is intended to have a starting point and ending point and a set order of how to get from one to the other. Also, all writing, but especially poetry, has a visual element. How it is laid out on the page as well as the font used have an impact on the eye that is separable from the verbal content of the writing. This isn't true for such form poetry as Herbert's "Easter Wings" but for all writing. However, again I would say that the verbal aspects of the writing far outweigh the influence of the work as a visual artifact on the page.

Photography doesn't work this way. When you look at a photographic image, you see it all at once. Now, this doesn't mean that your eye doesn't roam around the picture, focusing on one detail and then another, but only that all the information in the photo is equally accessible and it doesn't matter what you focus on first. It's not alphabetic. Viewers will definitely "read" the image and come to understand the significance of different details as s/he focuses on different areas in the photo, but there is no set order, no set starting or ending point.

Because of how differently viewers of photographs and readers of poetry or prose access the information encoded in the work, I think titles serve different functions for photography and writing. Titles aren't as important to the photographer since s/he has already given up so much control over how the viewer interacts with the image since photography lacks the alphabeticity of writing. I think this is one reason photography as a field has such a strong tradition of leaving photographs as untitled or merely tagging images with such literal titles as "Tree in Field" or "Child on Sled."

Another reason for this history of "generic" titles is photography's long tradition outside of "artistic" fields, working in such areas as advertising, portraiture, and journalism. Poetry doesn't have a non-artistic tradition per se. Photography however has a lot of tradition from these fields where the image is supposed to be a realistic, accurate representation of the subject. According to these traditions, no interpretation is necessary, so there is no need for the title to act as a guide.

Lastly, photography has long been tagged as a technology that has the best chance to accurately reproduce "reality." A reader of a poem or a novel expects to have to do some work to puzzle out the meaning of the written word. Interpretation is necessary to uncover the purpose behind the work. Photography certainly also skews reality. When the photographer chooses a subject and frames the shot, deciding what to exclude, s/he is staging reality just as much as any writer does. The physics of the camera itself also alter "realty" as it transforms a three-dimensional subject into a two-dimensional image. However, the camera is seen as a much better tool for providing a truly indexical sign (at least as close as it can get) of what it captures than a pen. Just look at the weight a court of law will place on a photograph for example over witness testimony. This cultural valuation of photography as being closer to reality than a written description also plays into why titles aren't as essential to the image as opposed to a piece of writing. No signpost is necessary to find the subject if the subject is already readily accessible.

So much for the theoretical, abstract portion of the blog discussion. Let's get down to specific examples and my particular approach to naming my images. I think Matt is right in that I often tend towards giving my photos simple, generic titles. For example, this photo which I called simply "Boot": 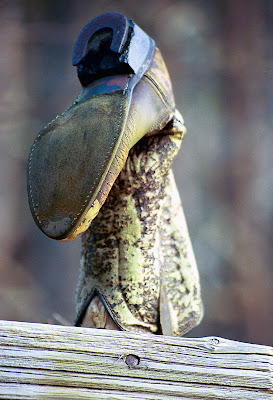 Why such a generic title? I mean, Matt is right. Duh! A boot? No kidding! Hadn't noticed the big freaking boot in the middle of the picture! One reason I used this title was because it was easy. I needed to give it a title to send off to a show. Also, such a concrete, simple title makes sense considering my artistic approach to photography. As I say in my artist's statement, my photography "engages the mundane objects of everyday life, the things that have become invisible to us, and rescues them from the background into which they vanish." A title such as "Boot" only re-emphasizes the concrete, mundane object, pointing where I want the focus to be.

What else could I call it? Worn Boot? Boot Fence? Booted? They are all perfectly serviceable, but I'm not sure what they add to the viewer's appreciation of the image itself. Do any of these titles speak more fully to any of you? Do any of them make the picture more interesting or meaningful? I would love to hear about your reactions?

As another example, one that I am currently struggling to title: 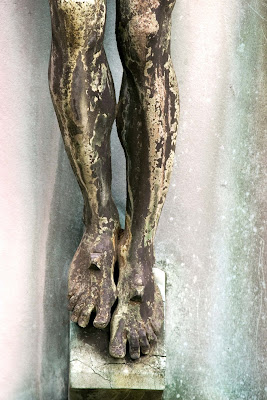 I initially was going to call it simply "Legs." This would fall in with the titles I often use, but for some reason, this doesn't really satisfy me. Sure, it's a picture of legs, but that is not really the point of the image. These particular legs obviously have a historical and cultural specificity that the title "Legs" doesn't take into account. What would be more meaningful? Here are some of the titles I'm toying with: Crucifixion, Nailed, Weathered Legs, Patina, Les Pieds. This last has some interesting possibilities since the picture was taken in a Parisian graveyard and this title provides the extra-photographic information suggesting that origin. Any help here would be greatly appreciated.

One exception to this whole discussion of titles and photography are for images that have been so heavily manipulated that they have lost their indexical power. For example:

The viewer is completely unable to tell what the original subject was. It's been completely set adrift from the object in the original photo that I manipulated. Here is what I worked from, a photograph entitled "Bridge Warts":

The manipulation of that image removed it's ability to represent it's subject. Someone looking at the abstract manipulation would be hard pressed to realize what it is a representation of. In this case, a title becomes just as important to the image as it does to any piece of writing, perhaps even more so. Without the anchor of the image's indexical nature, the viewer can make real use of a title's signpost to suggest a direction to take his/her interpretation of the photograph. I haven't settled on a final title for this image, but am considering Spheres, Orbs, Mitosis, and perhaps my favorite, Division.

Thank you for reading my incredibly long rumination on titles. Especially thanks to Matt for making me think. Take care.