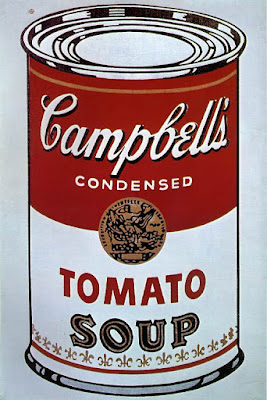 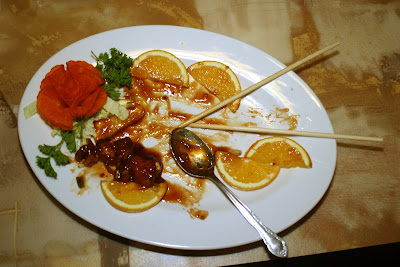 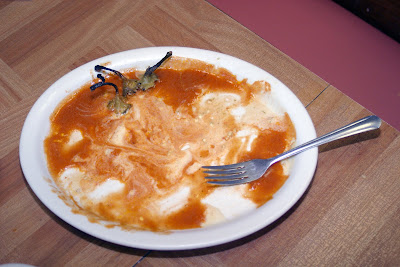 I think it's a great idea for a photo series. I don't know if you are planning to compose the photographs similarly, but you can probably change it up by having different angles, different depth of focus, etc.

I love the "Mexican Meal." The yellows and reds and whites really do invoke images of a a full plate.

Empty plates can tell a lot about the person that ate them. Did they clean their plate? Leave all the vegetables? Make a mess of things, or leave every individual part of the meal in its own neat little pile.

I'm assuming most of your photos will be of yours or Dawn's empty plates -- can't imagine you barging in on diners and asking to snap a picture of their plate of vanquished french fries -- so in that sense it is almost like a gastric diary of sorts.

Certainly having a range of dinners, from a cardboard tub of nachos to the fanciest of dinners.

Have fun exploring the concept. Sounds like a winner.

God, I wish I could edit my posts. Ignore the parts where it seems English isn't my native language.

Thanks for the feedback, Jacob. I agree that the color, texture, and shapes of the emptied plates can be very interesting. I'm thinking that they will be varied enough just from random eating that they will look different enough. The setting will also make it different as I eat in different restaurants. My plan is to have the plates all be my own.

Cool. Since they are all your plates it makes it sort of autobiographical.

Andy, how about a series on back hair? You know, it's signification both of virility and, um, being hairy? You could shoot yourself by facing away from the mirror and holding the camera backwards!

Seriously, I think the food idea has lots of obvious innervation points for art/critical theory types, though I'm not sure I agree with the SCAD chair that one has to think beyond one shot. Why? I don't see why connections can't be drawn afterward, as you suggeested in your post.

How about capturing eaters in the photos? It may add another element to show the dinner plate's relation to who left it.

Yeah, I'm thinking that capturing eaters might be a good way to get my ass beaten. Of course, maybe if I can capture back hair in my food, I'd have a lawsuit and would never have to work again!

All good points. Too bad you don't know people who eat, cause if you did . . . well, anyway. On the other hand, if you got your ass kicked over a photo . . . you're the photographer so I hardly need to tell you this, but think about the exposure!

check out this guy's site. There's mucho info on food photography that you may find interesting:

Thanks, David. Good to know!